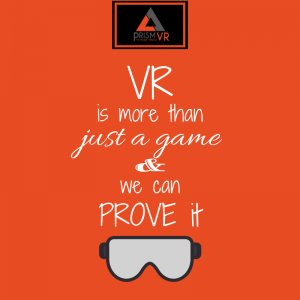 Obviously we’re big fans of Virtual Reality around here, we even named our business after it. VR is an exciting frontier in technology, with new advancements coming out all the time. However, for most people, Virtual Reality is seen as a development for video games and toys, not a serious tool for business and livelihood.

This probably started in the year 1995, when Nintendo released their console the Virtual Boy, which did not sell well, but still had a huge impact in placing in people’s minds the idea that Virtual Reality would be the future of video gaming. It’s interesting though that in the same year the film “Johnny Mnemonic” was release starring Keanu Reeves. In this film, audiences were introduced to the image of a future where virtual reality would play a part in a wide variety of everyday life activities, from bank transfers and data transfers to even your morning alarm clock.

As odd as it seems, this was a more accurate prediction of the future we’re living in than you might expect. Virtual Reality certainly has had its impact on the world of video games, but it has expanded to other realms as well.

Therapy- Virtual reality has opened doors for new forms of treatment for different emotional and mental health issues that would not have been possible or at least not as effective before. Role playing and mental exercises are able to be taken to a level that wasn’t as effective when just using a patient’s imagination or safe if stuck using only the real world. Researchers in London have found VR helpful in therapy for patients with depression, and researchers in South Korea have been able to use it in treatment for patients struggling with alcoholism. The military has experimented with using virtual reality to treat soldiers with PTSD by recreating battle conditions

Art- A new generation of artists have begun to work with Virtual Reality to create works of art that can recreate traditional sculptures or paintings, but can also take the step into new worlds, without the restriction of normal space or physics. Google in particular has worked to create tools for artists to create and share VR artwork, using their Tiltbrush platform. Time.com created a project where they found artists from a variety of styles and walks of life and equipped them with VR tools. The results were inspiring.

Real Estate and VR Tours- Perhaps not the most dramatic of the possibilities of VR, but the development that is swiftly becoming the most widely used. Virtual Reality tours allow you to visit locations from the comfort of your desk. Virtual Reality tours, like the ones we create, will introduce you restaurants you might be considering visiting, or create interactive online shopping. The real estate market has been revolutionized, allowing prospective buyers to view a home from the other side of the country, even the world. Exploring the space and premises without having to travel. You can buy your home, knowing it’s the place you want to live in, all without needing to set foot on the property beforehand.

If you’re interested in finding out how virtual reality can be applied to your business, call us today. We can’t wait to show you all the possibilities this technology has to offer.