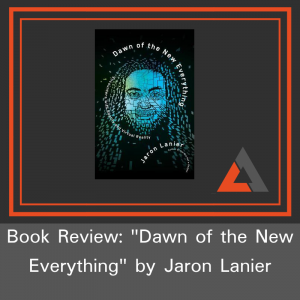 Jaron Lanier reads like a cross between digital Renaissance Man and a cross country adventurer. In adolescence, he designed and built the geodesic dome he and his father lived in. He traveled across the American southwest, studied world music, and trip-sat for Richard Feynman while the famed physicist experimented with LSD while he was dying of cancer. What puts Lanier right up our alley though is that he was one of the earliest developers in the field of virtual reality. He started VPL labs in 1984, and worked on some of the earliest versions of the virtual reality gear used today.

In his new book,  “Dawn of the New Everything: A Journey Through Virtual Reality,” Lanier delivers something that is one part autobiography, one part survey of the history of virtual reality technology, and one part a collection of his thoughts on both VR and technology more broadly.

While the autobiographical stories are fascinating, covering everything from Lanier’s parallel career as a music artist specializing in global music to his time as a midwife on the Mexico border, and leading up to his time with Atari, VPL, and Microsoft, Lanier’s thoughts on the development of virtual technology and where it can go are also deeply thought provoking. Lanier lists definitions for virtual reality as a way to describe the multi-faceted approaches the technology can cover. Lanier’s expansive life has lead to a unique way of looking at technology, its applications, and its future, so this book lets you understand all of that in a completely new way. A worthy addition to your book club or reading list for any VR fan.