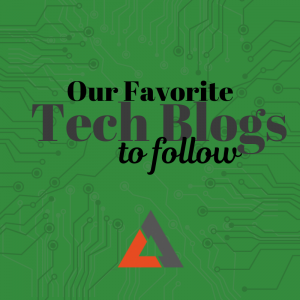 With changes coming every day in the field of technology, it's important stay informed. This can be difficult, especially because the internet is filled with a wide variety of unreliable sources that are either behind the times or poorly written. There are some great sources out there though, and we thought we’d share some of our favorites with you.

TheNextWeb.com - Based in the Netherlands, TNW is a fantastic source for detailed information explained in a way that's easily understood from a variety of backgrounds. They consider themselves as targeted to “Generation T” which they define as a cross generational collection of people of all ages who have a special interest in technology.

TechCrunch.com -  One of the older tech blogs that’s still active, TechCrunch has always had as its focus entrepreneurship in the tech sector. They’ve reinvented the presentation of the site over the years, like anyone who’s been on the web for that long, but the core of their quality content has remained reliable.

Recode.net- Founded by a group of reporters who left the Wall Street Journal, Recode brought a more rigorous and traditional journalistic drive to the field of tech blogs that was missing at the time. Now operated by Vox Media group, Recode covers the tech sector, as well as the wider context of how it’s influenced by politics, economics, and culture, with a more disciplined approach while still creating space for curiosity, cross linking articles to allow one interesting headline to take you down a rabbit trail of related content.

MIT Technology Review (www.technologyreview.com) - As would befit a blog brought to you by one of the most prestigious schools of technology in the world, The  MIT Technology Review isn’t afraid to get into the details of any given subject. The tone of some of the articles may at times seem dry, but the are deeply informative and not afraid to get into the weeds of a topic. An excellent source for anyone who wants some academic depth to their daily tech reading.

We hope this gives you a great start to develop your knowledge and stay informed!